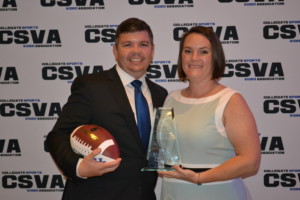 Fiero was selected by a vote of his peers to win the prestigious Bob Matey National Video Coordinator of the Year award this past week at the organization’s annual conference in Anaheim, California. He was one of 14 finalists for the award that included both football and basketball video coordinators.

The 2019 season will be Fiero’s sixth as the football coaching video coordinator at Kentucky. He came to the Bluegrass State in 2014 with more than seven years of experience. Four of those years came in the sports video department at Florida State University, where he served as the assistant director of video operations and football video coordinator. He was voted the Atlantic Coast Conference Co-Video Coordinator of the Year by his peers in 2013. Before being promoted to assistant director, he was the coaches video assistant at FSU from 2010-11.

Prior to moving to Tallahassee, Fla., he was the sports video graduate assistant at Marshall University in Huntington, W. Va., for two seasons.

He received his bachelor’s degree in broadcasting and electronic media in 2008 from Eastern Kentucky and was a student football video coordinator for the Colonels during the 2007-08 season.

Fiero has been an active member of the Collegiate Sports Video Association since 2008.

Fiero is a native of Midway, Ky. He is married to the former Brittany Bigham of Louisville, Ky., and they have one son, Frederick.